For my birthday, Donald bought me a season pass to Disneyland. I was so excited so Logan and I made the trip with my friend Andrea and her mother-in-law, Suzie.

When we first got there, we waited in line to get my picture taken for the pass. While standing in line, Logan kept waving and talking to himself. When I looked in the direction he was looking at, I saw Goofy! So needless to say, after the picture was taken, we waited in line to meet Goofy. Logan wanted Goofy to pick him up and would not let go of his hands or stop trying to squeeze his nose. We then went on to ride Peter Pan, the Carousel, The Haunted Mansion, The Roger Rabbit Ride, and the Winnie the Pooh ride. 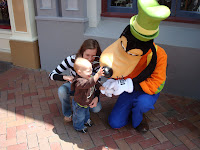 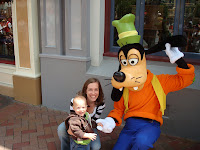 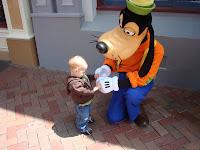 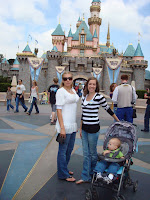 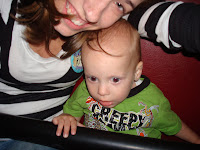 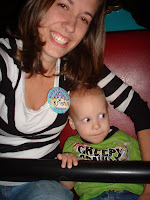 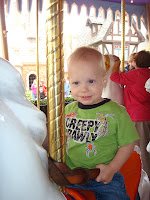 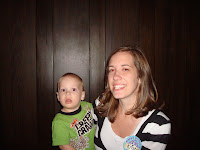 After lunch, we headed to Califonia Disney. We tried to get to the Playhouse Disney puppet show, but we were 3 minutes too late so we headed to meet Crush (the turtle from Finding Nemo.) Logan loved seeing the fish swim and even raised his hand on his own when asked if there were any questions in the audience. (I think he was just copying the other kids.) Afterwards, we made our way to The Beast's Library and then sang a song in Ursella's Grotto. Before the park closed we grabbed ice cream from The Burbank and then watched the parade. Logan had a great time as did I and we will definetly be going a lot more with my pass. 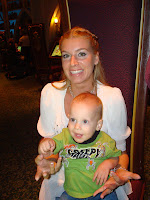 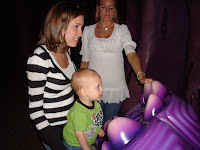 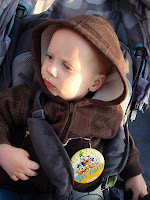 Thanks again to Suzie and Andrea!!!
Posted by Kristin Thomason Forshee at 4:03 PM

That looks like SUCH a fun day!! I'm glad you had a fun day at Disneyland. :)

yay! Happy belated bday. I'm sure you and Logan will have a ton of fun at Dland this year.

Your little guy is so big! Happy late bday! I am so jealous you get to be in CA and have so many fun things to do! Don't get me wrong i love North ID but the lack of Dodger/Laker games/ Disney can be a huge bummer! But we miss yall and hope you come see us in the summer!Oh and we can both name our kids London, no big deal!=)