These past few weeks have been exciting {& busy}, however, I keep forgetting my camera! So recently, Logan and I had the luxury of babysitting his {girl}friend, Anna Phelan for the whole day. Her parents decided to take a date to Universal Studios and we were able to play with Anna all day! The two were having so much fun! They destroyed the house within 30 seconds and decided to jump on the couch together. They also kept each other awake, not allowing the other to take a nap. Luckily they were both able to take a nap {at the same time} for about 45 minutes. This allowed me to clean the house a bit so that when they woke up, they were able to play {IE:destroy} again. 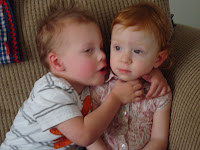 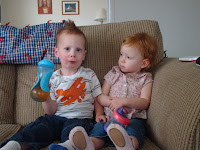 The next week began the craziness that will be happening these next couple of months. Donald has been playing basketball in the local city league for the past couple of weeks. And since his parents decided to go to one of his games, I ventured along with them. Logan loved being there but wanted to get on the court and play. He kept asking me, "mama, my turn?" It was so sweet! The score was very close the entire game. Thankfully, Donald's team won at the last seconds of the game, Literally! It was a great game and I was thankful to have Donald's parents there to watch the game {& Logan} with.

The next day, was Don's birthday {Donald's father}. The week prior we were told that Don and Carrie were going out to dinner, just the 2 of them, and then us kids and grand kids would meet up at Coldstone for ice cream afterwards. On the day of, Donald called me from work and asked if I could get a babysitter for Logan for that night. All of us kids were to meet up at Red Lobster for a surprise birthday dinner. I luckily was able to find a sitter {thanks Christina!} and we were off to eat. Sadly, this had been only the second time that we have paid for a sitter for Logan and the last time we had, was for Don's birthday last year when we went to Burbank to eat at PF Changs! Logan was not happy while we were gone. Lately he has been having some separation issues and that day was one of them. Dinner was great and we were able to make it home before Logan had a melt down.

The following Tuesday was Donald's 29th birthday. {He's an old man!} We decided to again go out to eat minus Logan. We were able to drop off Logan at Donald's Parents house while we went to Olive Garden. Logan was excited to go see Papa and Grandma. He even packed his backpack to take with him. The only problem was when he realized that Mom and Dad were not staying with him. He began to cry as Donald left. When we returned an hour and a half later, he was asleep in Grandma's arms. He had been sitting on the driveway with her, waiting for us like the previous week with the babysitter. It was so sweet and cute and sad at the same time. 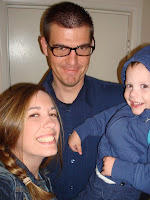 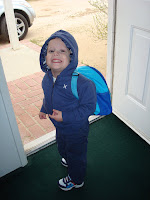 Posted by Kristin Thomason Forshee at 4:53 PM No comments:

Monday afternoon, I decided that the weather was just too nice this upcoming week to stay inside. So I called up some of Logan's friends' mommies and asked if they were interested in a beach trip the following day. They said yes, so Tuesday mid morning, we were off to the BEACH! To say that I love the beach is an understatement. I really miss living so close to it and being able to make that 15-20 drive to the beach for total relaxation.
When we arrived, we lathered ourselves in sunblock (considering we've been in solitude of our home for the past months of cold-ness), layed out the blankets and buckets and let the kids at it. Logan actually asked/told me he wanted to jump in the water... which surprised me considering last year he was terrified! So happily I walked with him to the edge of the water and let the waves get our feet wet. He had had it after about 4 waves and wanted to go back and play with his friends. The weather was so nice and I did not want to leave, but the other kidos were starting to get tired and that's when I knew it was time to leave. I could have stayed there all night! When we arrived home, Logan wanted to head back to the beach the following day. Except this time he wanted to go with "DADA". Hopefully soon the weather will be nice and we will make the trip back to my little piece of heaven! 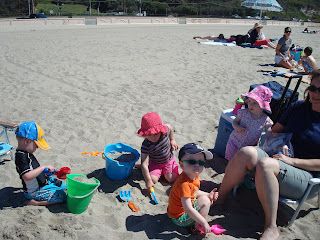 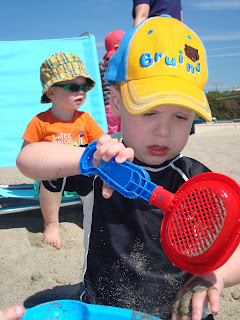 ***side note: I was so worried about Logan getting burnt that I had forgotten to reapply lotion on my own arms... they are now red! :(
Posted by Kristin Thomason Forshee at 11:05 AM 3 comments:

Every year, Donald's family has an Oscar Party. We each get ballots to fill out and then trade and mark each others. The person with the most wins and gets to host the party the next year. I was the winner last year, so this year I was the host. For dinner we had a pot roast with potatoes, corn, veggies, rice and Hawaiian rolls. For desert, it was delicious brownies. The decorations were black, gold and silver themed. Thankfully, I was able to get the same stars that Carrie (mother-in-law) used last year, so I streamed those across the ceiling. I also got some black streamers to add to the kids play room and the dining room. Then I just went to Party City and got some "Hollywood" plates and gold utensils. 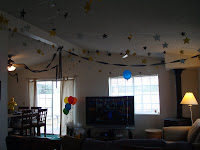 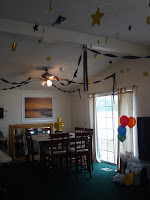 Since the Oscars always run past the time it's supposed to be over, we luckily recorded it and ate so that we could fast forward through commercials. Also, Megan and her kids were running late because they were at the Alice in Wonderland movie. Each of the kids got their "swag bags" (which was a coloring book and crayons). For the adults, we get gifts based off of the Best Picture Nominees. Since there were 10 this year, I decided to only do gifts for the others and exclude Donald and myself. Whom ever had the most correct got movie tickets and some junior mints. The rest of the gifts were a little house with balloons tied to it (Up), Army men (The hurt Locker), a football and pirate eye patch (the Blind Side), and Avatar figurine (Avatar), a composition book and pencils (An Education), and finally airplanes that fly (Up in the Air). It seemed to be a success, and looks like I get to host again next year! 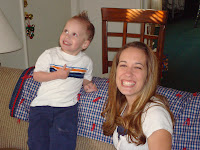 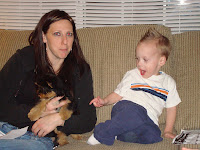 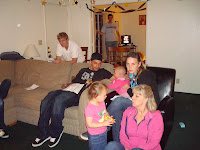 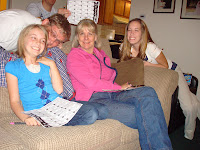 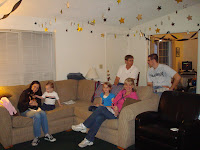 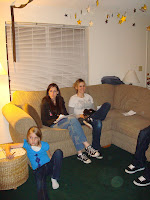 Posted by Kristin Thomason Forshee at 10:34 AM 2 comments:

Although Logan is now almost 26 months... He really needed a haircut. I didn't want to cut it because they are his baby curls and he will never have those back. :( It's obviously more emotional for me than it is for him. So, since he started looking like a beach bum, I decided to take him to get his hair cut.
He did so well sitting in the chair watching himself. I thought that he would have a melt down or something, so I made sure that Toy Story was on my phone ready for his viewing, just in case. But he didn't need it. He sat there, moved his head when needed and then when she was done cutting it, he replied to the hairdresser, "moose"! This boy LOVES product in his hair. ha ha. 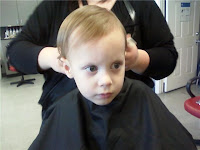 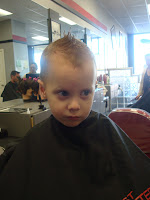 They gave him a certificate with a lock of his hair attached to it and a toy to take home. Afterwards, we headed to Sonic for Happy Hour and got some ice cream and a cherry limeade. He was also funny with the wind blowing... he was afraid that the wind would blow his "moohawk" away. I had to reassure him that it was staying on his head! 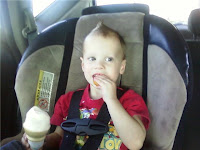 My little baby no longer looks like a baby. I got so teary eyed when she cut the first couple of locks that I had to take a few breaths... luckily I was able to hold it together. So here are his before and after pictures.... What do you think?
before 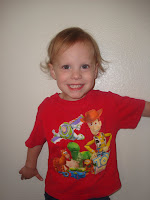 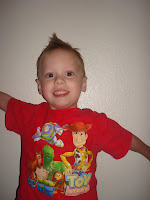 Posted by Kristin Thomason Forshee at 11:33 AM 4 comments:

On Friday, I traveled to Ventura County to visit my girlfriend from high school, Emily Norton. It was great to see her. She has been off of work for the past 2 weeks for surgery, so Friday was the last day before she had to head back to work. Luckily, Donald is off on Fridays at noon, so I left the house around 12:30 and made the hour and a half drive to meet up with Emily at her home in Camarillo. We sat around talking for a little bit, then headed to Oxnard for check-up doctors appointment. I waited for her in the waiting room in silence... it was the weirdest feeling and yet very relaxing! I didn't have to tell Logan to sit down, or put something back, or shhh-ing. :) After her appointment, we headed to the pharmacy to pickup her meds then made our way for a much needed lunch. Olive Garden (or the "OG") was just calling our names! As we munched on salad and breadsticks (and fetticuni alfredo for me), we chatted it up! We were laughing so much that I think I worked out my abs! Since Emily is getting married in May, we headed to David's Bridal in Oxnard for her to just look at wedding dresses. My dress is already picked out, but she wanted to look at a dress she had been eyeing online. I cohersed her into trying it on, and it looked AMAZING! It was so pretty, to say the least. The funniest part was when we first entered, we started looking at the racks and racks of dresses when something flew over our heads... Emily said, "oh no! there's a bird trapped inside", and I replied, "Emily, that wasn't a bird... it was a BAT!". That thing was flying around crazy trying to find a way out... it came so close to us several times. It finally got tired and landed in one of the fitting rooms. Luckily, not very many people were in there so the fitting rooms were empty. After Emily purchased her dress, we headed to her parents home in Newbury Park. We sat around and chatted for a few hours, then I got the call from home asking when I would be home. (Logan was in the background whining, "mommmm, home!" It was cute and made want to come home.) We drove back to Emily's in Camarillo to pick up my car and I made the drive back home. There was a ton of fog going up the grade, which slowed me down a bit, but I made it home safely! I love being able to get out of "Mommyland" for a few hours. I had so much fun and I can't wait for my next "mommy play date"!
Posted by Kristin Thomason Forshee at 10:55 AM 1 comment: