I have had a season pass to Disneyland since my birthday last year... so when Disneyland announced their "Give-a-Day Get-a-Day" program, I informed my mother and she signed up for it. They decided to use their tickets as part of their trip down here for my uncles wedding. Luckily they were able to do their day of service before the program ended {which was in March. It started January 1, 2010}. We went on a Monday, so my parents paid for 2 rooms the night before at a hotel across the street from Disneyland. So Sunday, after church, Donald, Logan & I headed to meet up with my parents at the hotel. Donald & I ate before we arrived at the hotel, but apparently my family had not... they were waiting for us before they ate. My dad wanted to visit an In-N-Out before he left, so we went on the hunt. Needless to say, we ended up way in Tustin but took the back roads to get there... it was an adventure to say the least & quite comical. The following day, my brother Jordan, sister Kelli & her husband Ernie decided that they wanted to come too. Also, my uncle Fred and 2 of his kids, Lantis & Janelle, as well as my uncle Jaren & his fiance Rebecca joined us. It was a very large group! It was beautiful that day... it wasn't too hot and it wasn't too crowded, either! We were able to do a lot of the rides {some more than once}. Logan loves Disneyland as do I, so it was nice to go back. During our trip, we also saw a couple of friends that day that were also enjoying "The Happiest Place on Earth"! {They were LDS friends.} After the park closed, we all walked back to the hotel where we said goodbye to Donald {he had to work the next day, so he hitched a ride with Fred}, Fred & his kids, and Jaren & Rebecca. Since my parents paid for 2 rooms for 2 nights, I stayed with them in one of the rooms with Logan and my brother Jordan decided to stay as well. It was a great trip, but next time, we will go with a smaller group. :)
Kelli, Kim, Jordan, Kristin, Blake, Chad, Donald, Kara & Logan. 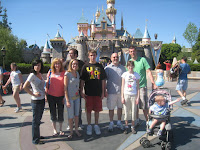 Logan and Kristin waiting in line for "It's A Small World" ride. 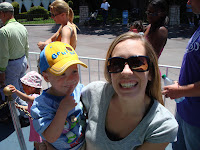 Kristin, Logan & Donald on the "It's A Small World" ride. 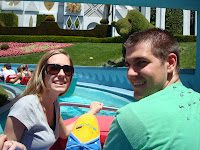 Logan looking at everything around him on "Small World". 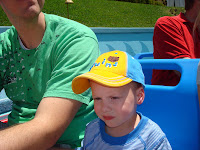 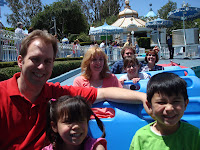 Donald & Jordan taking some time out to play video games. 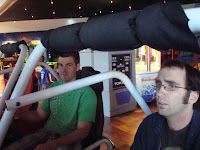 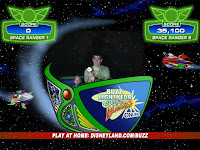 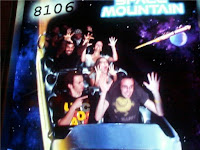 The Thomason kids {minus 2} 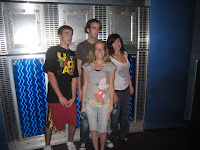 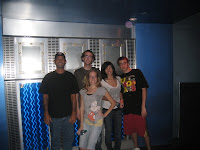 Glad you all had fun! I was wondering why your family would take a week in May to vacation....oh yea...Jaren's wedding.